The Christ-Child Fulfills the Law

Jesus was Joseph’s and Mary’s firstborn son, and he had to be redeemed with a sacrifice, “as it is written in the Law of the Lord, ‘Every male who first opens the womb shall be called holy to the Lord.’”

Beloved congregation of Christ: After Jesus was born in Bethlehem, the next two major events in his life are found in our text. First, Jesus was circumcised by his father Joseph on the eighth day of his life. Second, Joseph and Mary went up to Jerusalem 33 days later to fulfill two requirements of the Law: Mary’s purification and Jesus’ presentation. These two requirements were done before the priest in the temple in Jerusalem. 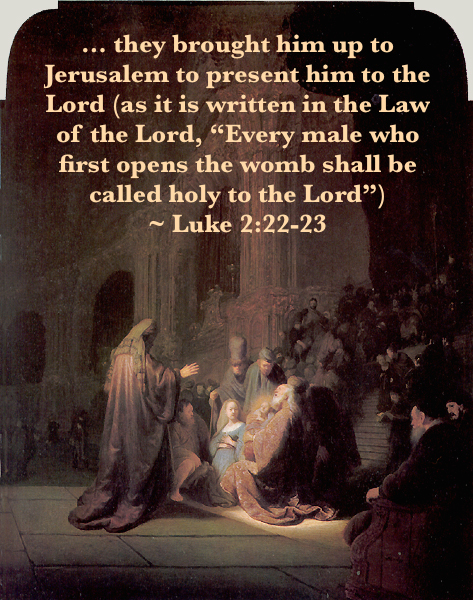 But what do we celebrate at Christmas-time? Most people, especially children, look forward to their presents. But Christmas is about Christ: the eternal God who came down from heaven and assumed human flesh and blood. He was like us in “every respect,” except for sin. All his life, he did not commit a single sin in thought, word or deed. When he first came down to earth, he had a mission: to fulfill all of God’s laws to the smallest dot so he would be the perfect Lamb of God who would save all his people from all their sins. This is why he said, “Do not think that I have come to abolish the Law or the Prophets; I have not come to abolish them but to fulfill them” (Matt 5:17).

Our text in Luke 2 tells us that even in his infancy, Jesus already obeyed the law of Moses, albeit through his parents, when they presented him at the temple. But this text is also very commonly used by most evangelicals as a warrant in “dedicating” their infants in a church service ceremony.

But why did Jesus’ family go to the temple, and why was Jesus “presented” at the temple? It was his first act of fulfilling the law, although it was his earthly parents who performed the action. So this third Sunday of Advent, our lesson is, “The Christ-Child Fulfills the Law”, upon which we will meditate under three headings: (1) In the Covenant Sign (2) In His Mother’s Purification; and (3) In His Presentation.